One of Olive’s admirers … 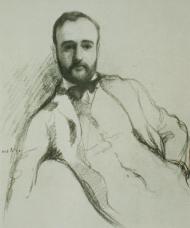 At sixteen Olive Custance was introduced into the literary society of 1890s London, meeting such men as the publisher John Lane, the writer and critic Richard Le Gallienne,  the future Father John Gray, and many others of the fin de siècle literary scene. One of these was also the now largely forgotten Scottish lyric poet , John Davidson. Davidson visited London, joined the Rhymers’ Club and frequented Ye Olde Cheshire Cheese, as literary men still do (eg. www.edmundburke.club)

Davidson was immediately taken by what Le Gallienne called the “flower-like charm” of the young Olive, and he made an eery prophecy about her, predicting both the course of her poetry and the nature of her marriage. It  begins like this:

“At sixteen years, she knew no care:
How could she, sweet and pure as light?
And there pursued her everywhere
Butterflies all white.”

“There only came to her forlorn
Butterflies all black.”

The poor man walked into the sea in 1909 and was never seen again. May he rest in peace.