The Douglases on stage

The lives of Olive Custance, her husband, Lord Alfred Douglas and even their son, Raymond have served in recent years as an inspiration for playwrights.

My Scandalous Life (2004), by Irish dramatist Thomas Kilroy, is a monologue of Lord Alfred reminiscing about his life, occasionally interrupted by Olive’s Irish maid, as Olive lies dying upstairs. https://irishrep.org/show/2010-2011-season/my-scandalous-life/

In The Garden of The Asylum (2011) Thomas Kilroy switches to the story of Lucia Joyce, daughter of James Joyce and Raymond Douglas, son of Bosie (Lord Alfred Douglas) and Olive. Both spent time at the Psychiatric institution in Northampton, England. Thomas Kilroy fashions this drama based on a fictionalised meeting in the garden of the asylum. Available from RTE:  http://www.rte.ie/drama/radio/plays/history/2012/0329/647021-genres-history-inthegardenoftheasylum/ 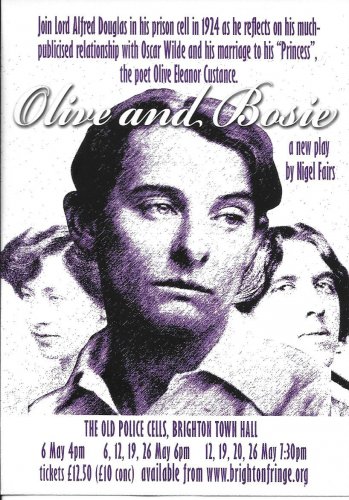 Olive and Bosie, (performed for the first time in May 2017) and written by Nigel Fairs, is set at the time when Bosie is in prison for the defamation of Winston Churchill. Here is a review: http://broadwaybaby.com/shows/olive-and-bosie/718367 and here is a trailer: https://youtu.be/jW2_PvBYbhs